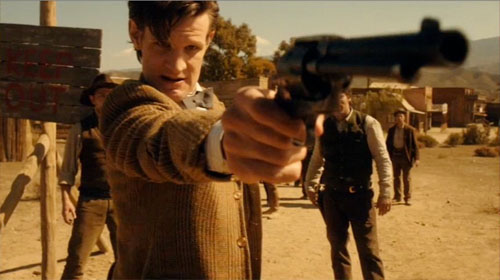 The 11th Circuit has reversed a district court ruling and, instead, concluded that Florida’s “docs vs. glocks” law is constitutional.  This is a victory for gun proponents who voice concerns that inquiries from Florida doctors about gun ownership was an invasion of privacy.

The case is Dr. Bernd Wollschlaefer et al. v. Governor Scott / State of Florida et al.   The opinion and dissent run 152 pages, here.  There were more than 25 amicus briefs.  [the relevance of our image above?  That’s Dr. Who]

U. Miami Law Review provides a nice overview of the law and procedural history leading to the appeal, here.

Since we cover Florida law, privacy, and First/Fourteenth Amendment issues on this site, this case falls outside the purview of “internet” issues but inside the scope of law that is important to our niche interest.

Let’s break down the opinion and dissent analysis into bite-sized pieces:

*  While the opinion found that the statute was constitutional, it states (twice) that this does not prevent doctors from raising Constitutional claims as affirmative defenses in actions brought against doctors.  The downside is that this is belated, potential relief — the doctor has to be the subject of an action and is raising an argument which, albeit dealt with in broad strokes, was already shot down.

* During the argument over whether the Plaintiff-doctors had standing, the State actually argued that the Act “merely suggests that the physicians ‘should refain’ from inquiring as to firearm ownership… such hortatory language, the State argues, does not constitute a mandate that physicians must not inquire.”  The opinion further notes, “the State argues [that] we have an obligation to read the Act as a mere recommendation…”  The Court did not accept the State’s attempt to water down its own statute in order to meet constitutional muster: “We disagree.  Laws — such as the Act — that provide for disciplinary action in case of violation should generally not be viewed as hortatory.”

*  Record Keeping:  The Act prohibits physicians from intentionally entering information regarding gun ownership into the medical record if the physician knows that the information is not relevant to the patient’s medical care or safety of others.  The court said that “intentionally entering” prohibition turns upon the “physician knowing.”  “Logically, when a physician does not know that information concerning firearm ownership is irrelevant…, the prohibition does not apply.”  The court found that there is a “high degree of certainty as to non-relevance” before the prohibition takes effect — “any mental state regarding irrelevance that does not rise to the level of knowledge would not trigger the prohibition.”  That said, there is no “neat, one size fits all definition” of relevance and it will turn on individual cases.  Which means any documentation by the doctor is subject to challenge which then leads to an inquiry (action) whether the doctor “knew” it was “irrelevant.”  Of note, it appears that the doctor may have to have “some particularized information about the information” before documenting the patient’s fire arm owning status.

* Make sure you catch the quip on page 42 about the illegibility of doctors’ handwriting.

The countervailing question is how will a doctor know if gun ownership is relevant if they can’t inquire.  The dissent raises the interesting point that the AMA has a policy encouraging its members to inquire as to the presence of household firearms as part of childproofing the home: “Many doctors and medical organizations assert that it is always relevant to ask about — and thus, to record — firearm ownership information.”  The dissent also points out that, in the medical community, there is little debate that providing patients with information about firearm safety is a good thing.  Several national and Florida medical groups “recommend providing counseling and guidance on a variety of injury-prevention topics including firearm safety.”  The ABA, in Resolution 111, likewise supports the doctors’ position.  The dissent concludes, “the record and common sense lead inexorably to the conclusion that children will suffer fewer firearms related injuries if they — and their parents — know more about firearm safety.  But now they will know less.”

* The court notes that these prohibitions exist “during an examination” and do not apply outside of that context.

* The majority seeks to ameliorate the situation by noting that “patients themselves cannot subject a physician to discipline.”  This is true in the same sense that, say,guns don’t kill people, people do.  It is, after all, the patients who make the complaint which leads to the disciplinary action.

* The dissent notes that “there is no evidence suggesting that firearm owners were denied care because they were firearm owners.”

* The dissent notes that the State asserted that the act promotes the interested of privacy in gun ownership — “But the Act is not drawn to serve that interest.”

* The dissent concludes, “Doctors’ jobs are hard enough when the State does not enact laws that force them to think twice about asking questions and providing information that may save lives.”